We have a winner! Zac Couture’s winning entry for the Name That Vegetable Contest came shortly after last week’s message was sent out –  about 11:30pm (possibly Zac was doing late night duty taking care of 7-month old baby son Oliver….).

Plants of the Bible playing cards are beautifully illustrated and just the thing for your next game of rummy! I received a deck from a friend this summer and look forward to playing with them all winter.

Many of you recognized that the mystery vegetable was Lamb’s Quarters. I think Susan Sides of the Lord’s Acre garden in Fayette, NC, summed up the attraction of Lamb’s Quarters best when she called it “the new kale.” Look for it soon on the menu at an upscale restaurant. Use it in any recipe that calls for spinach or Susan says just sauté it in olive oil with garlic.

Comments: Lamb’s Quarters is often dismissed as a mere weed, but it is an important source of food and cover to many kinds of insects and birds. The young leaves and stems can be added to salads (the taste is rather bland and dull), or they can be boiled as a potherb. Some tribes of Amerindians reportedly ground the seeds into flour. Lamb’s Quarters have been the subject of taxonomic disputes among botanists. Some authorities consider Lamb’s Quarters to be a variable species with numerous varieties, while others view these varieties as separate species. To correctly identify a Chenopodium sp. (Goosefoot), several features should be taken into consideration. Lamb’s Quarters has: 1) horizontal seeds (relative to the position of the flowers), 2) foliage that is mealy white while young, 3) a calyx with a mealy appearance that nearly encloses the seed, 4) a membranous seed covering that is difficult to remove, and 5) rather broad leaves with margins that are undulate, slightly lobed, or dentate, rather than smooth. These five features, when they are taken together, distinguish Lamb’s Quarters from most Goosefoot species. Plants with largely glabrous leaves on the undersides are often classified asChenopodium album missouriense (Missouri Lamb’s Quarters), while the typical variety has leaves with white mealy undersides. Mohlenbrock (2001) considers Missouri Lamb’s Quarters to be a separate species,Chenopodium missouriense.

(Big thank you to Jo Anna Hebberger, PhD. for sending me such helpful information about Lamb’s Quarters.)

This week in the Faith & Grace Garden we say good-bye to many Burmese friends who helped in the garden on Thursday mornings and hello to students who are returning to the garden after summer vacation.

Below is the Entrepreneurial Studies class from Dowling Catholic High School with teacher, Tracy Sandebothe. 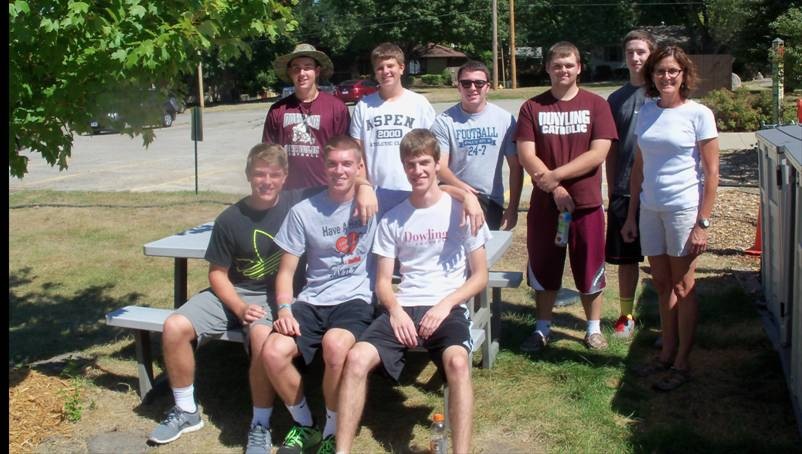 Below are our garden production and donation totals through September 3:

See you in the garden!
Tim

Click Here to Donate to The Faith and Grace Garden